UNA. NESSUNA. CENTOMILA. THE CONCERT, the largest musical event ever against gender violence at the RCF Arena Reggio Emilia (Campovolo) – initially scheduled for September 19, 2020 – has been postponed to June 26, 2021.

Due to the current health emergency situation and in light of the related government provisions on public health regarding gatherings of people, it was postponed to June 26, 2021 “UNA. NESSUNA. CENTOMILA. THE CONCERT”, the biggest musical event ever against gender violence.

ONE, because every time a woman fights for herself, she fights for all women, NONE, because no woman has to be a victim anymore, ONE HUNDRED THOUSAND is the number of voices that can join the 7 artists to support such an important battle.

With over 85,000 tickets already sold, “UNA. NESSUNA. CENTOMILA. THE CONCERT” is a show that was created to give concrete help to centers and organizations that support and support victims of violence. The proceeds of the concert will be paid to structures selected on the basis of transparency and traceability criteria, structures capable of providing solid and lasting support to the victims and guaranteeing and ensuring the sustainability of the activities they carry out over time.

To support such an important cause, FIORELLA MANNOIA, EMMA, ALESSANDRA AMOROSO, GIORGIA, ELISA, GIANNA NANNINI, LAURA PAUSINI, will take turns on the stage of the RCF Arena in Reggio Emilia, each with their own band, and each of the 7 artists will invite a colleague, man, to perform together to launch a unique message, which unites men and women in the battle against gender-based violence.

The use of all the economic resources collected under “UNA. NESSUNA. CENTOMILA. THE CONCERT” will be reported and communicated in total transparency.

It is also possible to change the name on the ticket in your possession, following the name change procedure available within the MyTicketOne area on the website www.ticketone.it 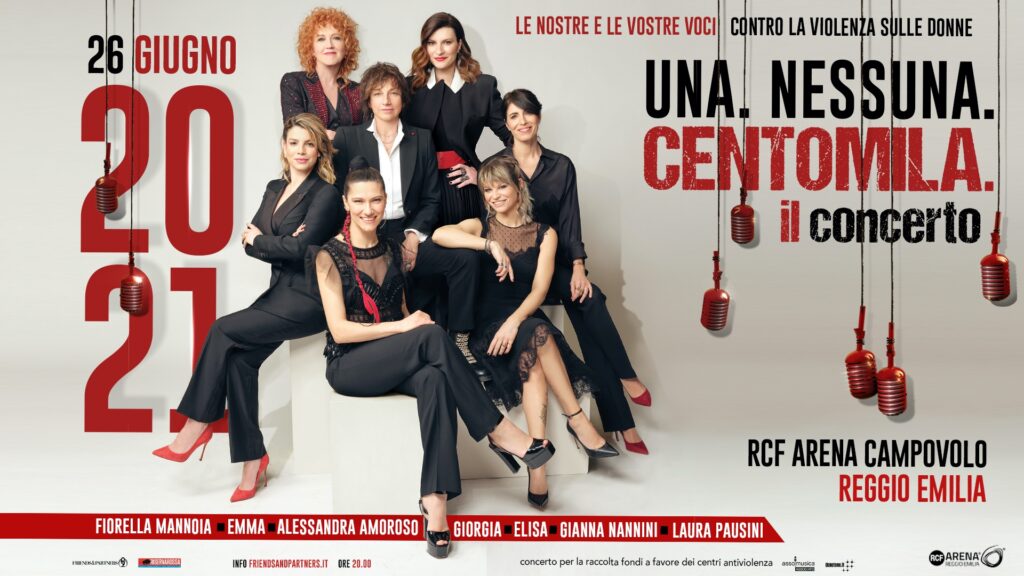 Made by Kaiti expansion